The second lecture of the Sinhala medium Monthly Scholarly Lecture Series organized by the CCIS under the title of ‘The Scholarly Discourse on Indian Literature’ was held on 28th February 2022 at 4:00pm at the Board Room of the Faculty of Graduate Studies, University of Colombo to mark the 10th anniversary of the CCIS and the 75th anniversary of the Independence of India. The second lecture was delivered by veteran literate Mr. Karunarathna Amarasinha on ‘The Elegance of Sanskrit Literature’.

This event was held under the distinguished patronage of Senior Professor Rathnasiri Arangala, Dept. of Sinhala and Mass Communication, Sri Jayawardenepura University. Dr. Jagath Bandara Pathirage introduced the keynote speaker Mr. Karunarathna Amarasinha. Limited interested audience was invited for the event and a lot of literary connoisseurs participated via Zoom, Facebook and YouTube as well. This scholarly lecture series is organized by the CCIS under the guidance of Chair Senior Professor Upul Ranjith Hewawitanagamage (Director, CCIS). 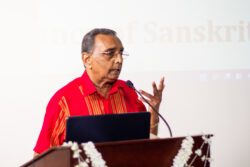 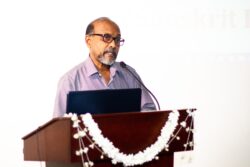 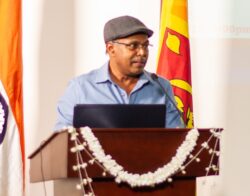 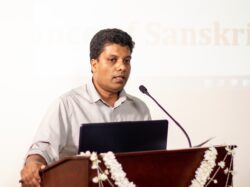