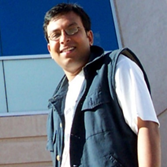 He has been serving at the Department of Economics, Delhi School of Economics, University of Delhi as an Assistant Professor, since February 2010.

As regards his educational qualification, he got his first degree, BSc (H) in Economics, from the University of Calcutta in 1999. He obtained his higher degrees, a Masters and a PhD in Economics, from Jawaharlal Nehru University, New Delhi respectively in 2001 and 2011. professor (now Retired) Satish K. Jain at the Centre for Economics Studies & Planning at JNU supervised my PhD thesis on economic analysis of contract laws.

As to his past employment details, he had taught at the Department of Economics in Atma Ram College [DU), as an Assistant Professor for four and half years (2005-10). Prior to that, he also worked briefly in the corporate sector: he was a Business Analyst at American Express Bank and served at their India and US offices [2002-03).

Of late he made conscious choice and started to focus on development economics with a special attention on India’s developmental issues. Urban poverty is one of the most burning issues and less researched area in this country. Presently, he is working on a European Union funded project on Indian Urban Poverty (2072-77). This project gave him an opportunity to collaborate with the leading economists of the world who are engaged in policy making for poverty alleviation in different countries, they have produced several research and policy papers related to living standard in urban slums of India. They have proposed a Multidimensional index approach to identifying the incidence and intensity of urban poverty in various lndian cities. This leads them to undertake advocacy with the appropriate government agencies towards better policy framing that can improve the lives of hapless urban poor.

As to my agenda for the ICCR Chair (Contemporary Indian Studies) at the university of Colombo, Sri Lanka: I intend to contribute two ways – through teaching activities in the university for masters and PhD students, and through research activities. A multi-pronged research agenda can be devised that can look into – (a) developmental aspects/issues in Sri Lanka, e.g. devising multidimensional poverty index, identification of targeted beneficiaries, devising policies for integrated development etc., (b) identifying areas and ways of better economic co-operation and trade between India and Sri Lanka that can contribute to economic growth of either country.

Currently the Visiting Short – term Chair at the CCIS. Prof. Mohammad Gulrez is Professor & Former Chairman in the Department of West Asian Studies and North African  Studies, Aligarh Muslim University, Aligarh. He also serves as the Coordinator , ‘Conflict Resolution & Peace Studies Programme’. Prof. Gulrez has also been the founder Director  ‘Centre for South African & Brazilian Studies, AMU. From January 1999 to January 2004 , he served as visiting Faculty , Department of Political and Administrative Sciences at the  National University of Rwanda , Central Africa . Prof. Gulrez started his career as Lecturer/Assistant Professor in the Department of Political Science and as Co-opted faculty  member in the Centre for Strategic Studies at AMU. Prof Gulrez was the Consultant /researcher, Good Governance (Component) for the Poverty Reduction Strategy Paper (PRSP) Project, Govt. of Rwanda (2002). He has authored and edited six books and contributed more than 35 research papers in research journals, and books published in India and abroad. Some of his publications include: Conflict Transformation in West Asia (2004) , Settlements and Resistance in the Occupied Territories (Ed.2005),Constitutional Poll Battle : A Study of Iranian Presidential Election 2005 (2008) , Area Studies in India (Ed.2009) Arab Spring & Prospects of Peace in West Asia ( 2015) etc . He is on the International Advisory Board of Asian Review Institute of Asian Studies, Chulalongkorn University, Bangkok, Thailand. Pof. Gulrez is currently working on Confidence Building Measures focusing on both the bi-lateral and multi-lateral tracks of the peace process. His area of specialization is Conflict Resolution , Ethnic Conflicts, Civil Society, and Poverty Alleviation. Prof. Gulrez has travelled extensively delivering lectures and participating conferences and seminars in various universities in the USA, Iran, Pakistan, Libya, Rwanda, South Africa, Thailand,United Kingdom, Senegal, Ghana ,Saudi Arabia and Kyrgyzstan . He holds M.Phil and PhD from Aligarh Muslim University.

Prof. Gulrez will work collaboratively with the other relevant Departments of the University of Colombo during his tenure at the CCIS.

Is an Indian academician, public intellectual and social activist with over 40 years of experience. He holds a PhD in Political Science from the University of Delhi, India and a Diploma in Conflict Resolution (Advanced International Programme) from Uppsala University, Sweden.  He is an Associate Professor of Political Science at Satyawati College, University of Delhi. His experience includes teaching graduate, post graduate, and M Phil classes; research in the areas of minority rights, conflict/conflict resolution, and communalism in India; supervision of MPhil and PhD students; curriculum development; and editing a well-known journal Social Change. He is also on the Editorial Board of Kulturni Studia (Cultural Studies, an International Journal published from Czech Republic). He has contributed papers/chapters to distinguished scholarly journals and other important publications. He has presented papers in many national and international conferences in India, Iran, Turkmenistan, Estonia, Finland, Sweden, and the US. He has also travelled to Denmark, France, Russia, Turkey and the UK. His social concerns have pushed him to social activism: he is President of the Initiative for Democracy and Peace, as also the President of the Bilal Ahmed Foundation Trust, both situated at Delhi in India. He has worked as Senior Fellow, and then as Honorary Senior Fellow, at the Council for Social Development, New Delhi. He has also been a member of the Advisory Committee of the Developing Countries’ Research Centre at the University of Delhi. In 2005, in recognition of his outstanding services in the field of education, he was awarded by the International Association of the Lions Clubs: Lion Clubs Delhi-Noida, a Certificate of Appreciation for Lifetime Achievement. In 2006, in recognition of the contribution made for the promotion of inter-religious cooperation, international harmony, and the establishment of a culture of peace, Universal Peace Federation honoured him with the Ambassador of Peace award.

Prof. Sharma will work collaboratively with the other relevant Departments of the University of Colombo during his tenure.

Dr. A. K. Chattopadhyay (Visva-Bharati University, Santiniketan) completed his term as a 1st Visiting Professor at the CCIS. He was attached to the Dept. of Economics, University of Colombo. During his stay at the University of Colombo from April 2012- June 2012, he assisted the CCIS to prepare a syllabus for a certificate course on Contemporary India.